The Opposable Mind - Discussion with Heather Reisman and Roger Martin 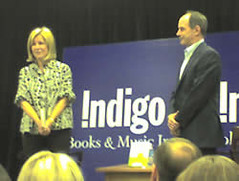 I had the opportunity to attend a discussion about Roger Martin’s new book, “The Opposable Mind” at Indigo the other night. [I had purchased a copy of the book but I still had not finished it when I attended the discussion.] Heather Reisman the CEO of Indigo interviewed Roger and after a exuberant introduction asked him to explain the main thrust of his book.
He responded that many business books on the market now are challenging in that they ask the reader to emulate certain behaviours shown by successful leaders. The issue with this approach is that many CEOs approached problems differently in various stages of their career and more importantly readers have a hard time internalizing many of these key behaviours because each situation is unique and readers may not be equipped to deal with subtleties particular to their challenges.

So instead of looking strictly at anecdotal situations, he went back and asked was there a common thread in their ability to think about challenging situations and resolve them to a satisfactory conclusion? After interviewing many leaders, he saw that there was a common thread to their thought process: they were able to hold two opposing ideas in their heads at the same time and think about them not in as ‘either/or’, but as a ‘both/and’ manner.

Heather Reisman then brought up Edward deBono’s concept that “our brains are like formed Jello” and that if you pour boiling water over the Jello, it creates a ridge which water then returns to again and again. This is roughly analogous to developing and reinforcing techniques by repetition.

If this is true she asked, can using your mind “laterally” strengthen the techniques in the Opposable Mind?

Roger responded that he shared de Bono’s confidence that this is possible but added that it would not be enough to tell someone to “think laterally” but that leaders do something different; as described in the book, they use a four part thinking process (usually unconsciously). They consider:

He made a good point in illustrating some issues where representatives from Herman Miller (disguised in the book as a company called VisionTech) hear two different things from a potential client based on their perspectives in the organization. “Reality seldom is,” was how he termed it, and leaders have to listen to different viewpoints of people in their organization to determine salience because some things are salient that were never in their original assessment of the situation. [Heather actually remarked that the way she remembered these steps was with a mnemonic: S.C.A.R. Roger responded that he’d never thought of it that way!]

Then Heather put out a real life challenge to the audience that Indigo faced: given the currency fluctuations and the fact that most of her inventory is sourced from the United States, when books arrive on the shelf there is often a marked discrepancy in prices in US and Canadian funds. How could Roger and then the audience use this methodology to come up with some solutions to the problem.

Roger went over the basics of the issue and then Heather asked the audience. There were a few suggestions, but one member remarked that the tendency was still to jump right to solutions without doing more listening to the different stakeholders, which is true to a point, but difficult to do in that context. [I have some thoughts on this problem… but haven’t put them down in print… yet  ;> ] In the end, it seemed that this was a challenge which didn’t have any quick fixes but will require imagination and a different path to solving.