Richard Florida interview - Who's your City? 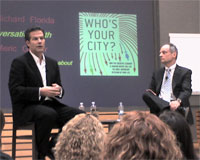 I recently had a chance to see Richard Florida speak at the launch of his new book, “Who’s your City” hosted at the Rotman School of Business at the University of Toronto. He was ostensibly being interviewed by his old friend Meric Gertler, but he was able move the conversation fluidly from the question at hand to such topics as keeping talent in Atlantic Canada and even on the “Singles index.” But more on that in a moment….

He started out by mentioning that one of the working titles for the book was “Why Place Matters” but upon finishing the draft felt that the title of “Who’s your City” really captured the essence of the book better. Because as he noted, with increased global mobility of everything from goods and services to citizens, where you choose to set up shop and live out your life can be a very telling indicator of how successful you’ll be in life.

Common wisdom says that advanced in communication technology combined with advances in transportation technology means that the world would tend to become more decentralized as in “The world is Flat” by Thomas L. Friedman. Or basically that with a PC and broadband you would be able to work anywhere. But Florida said this is only about half of the explanation. These advances are not spread evenly throughout the world and as a result, would lead to clustering around certain centers.

But what if you’re unlucky enough to have missed out on the opportunity to be born (or live) in one of these Mega-Regions? How can these areas like Pittsburg or Hamilton (his examples, not mine!) help to transform themselves? There are two main things to recognize:

The key to understanding this is to keep in mind that the manufacturing jobs that made these “blue-collar” areas great in and around the turn of the 20th century (with Union involvement and increasing wages) have largely disappeared in favour of service economy jobs which are by and large less lucrative. So these cities must fight a battle against a rapidly increasing vacuum, sucking prosperity out of these cities to more “attractive” Mega-Regions.

Another topic that has caused some debate is Florida’s assertion that regions exhibit their own personality and that certain people are drawn to these personalities. Among the five kinds of personalities are “extroverts” and those that are “open to experience.” Those that are open to experience tend to migrate and cluster where they can “identify” with the regional personality. The critical message in this discussion is that one needs to understand the regional profile (and make sure it matches yours at that time) or you won’t be happy with your choice (or lack of choice).

To switch gears Gertler asked Florida what drew him to Toronto (besides the great job opportunity)? His answer surprised more than a few audience members in that he asserted that Toronto is one of two great cities in North America! To further his point he noted that the city is on the upswing and he really sees that he has an ability to make an impact (and it certainly helped his case when he mentioned that the city was a hybrid entertainment/ creative centre, with a heart!)

When asked about the Singles Map, Florida seemed a bit exasperated stating that this is the only thing that the media in the US seems to want to talk about from the book, whereas in Canada, there was a more broad based debate on many aspects of the book. In fact if you look at the map it seems that if you are a single man, the eastern US (and particularly the north east) is the place where you would seem to do all right. His research leads to the conclusion that this clustering occurs even within the dating game, though not sure how this would translate to other segments.

When initially considering cities to relocate to Florida made a map on a napkin with the pros and cons listed and Washington, DC and Toronto rose to the top. He noted that he chose Washington because at the time he thought that he could have an impact and change the entire nation, based on his work. But then Bush got elected… twice, and he pretty much gave up that notion.

In an interesting twist, he asked aloud whether the cities we live in are somehow matched to our situation in life. Even thought it is a tradeoff between our jobs and our lifestyles we do make those calculations based on what we think will match our aspirations at a given point in life. And corporations should become more adept at realizing these choices as they search for talent to help them grow. He noted that Google has become extremely strategic about location and bases some of their decisions based on the “people factor” in the surrounding region.

He then mentioned that Jane Jacobs said Adam Smith had it wrong; cities and people drive development by creating new work and that now instead of government planners, market forces are increasingly responsible for our urban outcomes. Because in the end we have to be responsible for our choices, even if we don’t end up making the decision to move out of our current locations. He also mentioned that in his adopted city of Toronto, he wished its citizens would “stop whining about how bad the city was” and really start to lead to make the city truly great, because in his eyes it seems as if the best days are still in front.